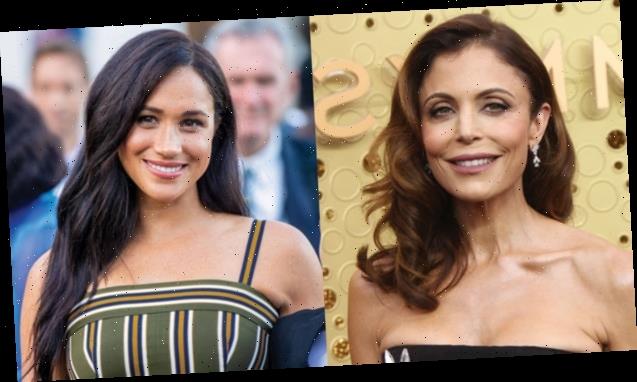 Bethenny Frankel went in on Meghan Markle the day of her Oprah interview! While some fans agreed with Bethenny’s opinion, others quickly jumped to Meghan’s defense.

Bethenny Frankel didn’t hold back on her thoughts when it comes to Meghan Markle and  Prince Harry‘s upcoming interview with  Oprah Winfrey. “Cry me a river…the plight of being a game show host, fairly unknown actress, to suffering in a palace, [with] tiaras & 7 figure weddings for TWO WHOLE YEARS to being a household name [with] @Oprah on speed dial, fetching 7 [million] for interviews, hundreds of millions in media deals,” she wrote on Sunday, Mar. 7, adding a thinking face emoji and the hashtag “Marry” for their names. HollywoodLife has reached out to representatives for Harry and Meghan for comment.

The Duke and Duchess of Sussex are speaking out for the first time since officially stepping down from their royal duties and moving from London to Montecito, California. In a brief clip from the interview, Harry referenced the tragic death of his mother Princess Diana — which Bethenny seemed to acknowledge in a second tweet. “I [100%] give Harry a break,” the former Real Housewives of New York star went on — but still cautioned she didn’t think an interview was the right move, especially after the couple have said they want a more private life. “This isn’t the way to generate less press & cannot be filed under the guise of wanting privacy to prevent a repeat of previous events,” she quipped.

In the preview clip, Harry says that he and Meghan decided to move to California with son Archie, 1, because his biggest fear was “history repeating itself.” Following Diana’s 1992 separation from Prince Charles, now 72, the Princess of Wales was regularly chased and scrutinized by British tabloid media. The then 36-year-old and her partner Dodi Fayed were both killed in a car crash in the Pont de l’Alma tunnel in Paris while being chased by paparazzi.

While some on Twitter agreed with Bethenny, others defended Harry and Meghan’s choice to speak their truths. “I think everyone should wait for the interview. We don’t know what is said until the tell us. Speculation makes great conversation but it isn’t the truth until we hear it from the source. She married a man she loves and he her. They didn’t like their life and changed it,” one fan wrote. Another added, “Are you saying Harry deserves a break and meghan doesn’t?! Personally I don’t think anyone deserves to go through what Harry and meghan are put through!!” 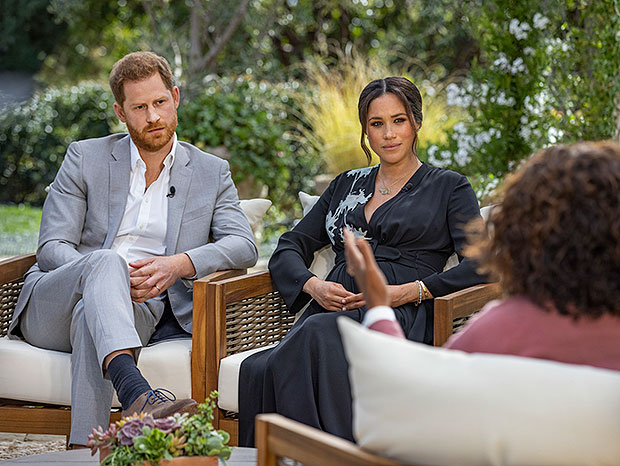 The fired up tweets come after a public outpouring support for Meghan by her close friends, including former Suits co-stars Patrick J. Adams and Abigail Spencer, as well as friend Jessica Mulroney. “From day one she was an enthusiastic, kind, cooperative, giving, joyful and supportive member of our television family. She remained that person and colleague as fame, prestige and power accrued,” Patrick wrote in a lengthy Instagram post, blasting the Royal Family as “archaic and toxic” and an institution that has “has outlived its relevance, is way overdrawn on credibility and apparently bankrupt of decency.”

In a clip from the upcoming Oprah interview, Meghan called out “the firm” for “perpetuating falsehoods” about herself and Harry. “I don’t know how they could expect that after all of this time, we would still just be silent if there is an active role that the firm is playing in perpetuating falsehoods about us,” she said during a clip from the outdoor interview. “And if that comes with risk of losing things — I mean, there’s a lot that’s been lost already.” The couple moved to California in 2020 and have since started their own charitable organization, Archewell, as well as signed content production deals with Spotify and Netflix.

Bethenny continued in her series of tweets, “If you hate me for saying it here don’t listen to my podcast #justbwithbethenny it’s littered with my opinion…I chose reality tv, to work towards making $, to be scrutinized & criticized.I took the trappings & the beatings along with it. It’s a rose [with] petals & thorns. People beg to enter the often toxic institution I signed up for. That WAS the life I chose. You can’t play stupid & smart.”