SEBASTIAN SHAKESPEARE: Bankrupt property tycoon, 55, has his marquee six-bed home sold from under his feet at a £2MILLION loss to help pay the creditors he owes £40m 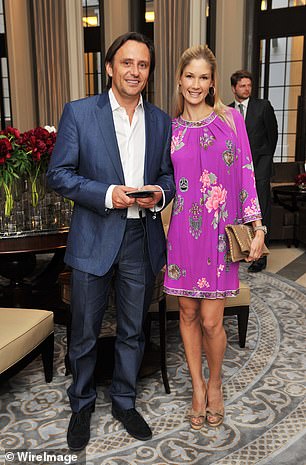 Property tycoon Kevin Cash could have been forgiven for believing that the New Year couldn’t be worse than 2018, during which he was declared bankrupt, owing creditors £40 million.

If so, he’s been swiftly disabused. For I can disclose that Birmingham-born Cash, 55, who until recently appeared in various Rich Lists with an estimated £500 million fortune, has seen his trophy London property sold off by receivers.

With six bedrooms, three reception rooms and three terraces, the Regent’s Park property was described as being in ‘one of the most prestigious and sought after’ parts of the Crown Estate — details which presumably encouraged Cash to acquire it for £8.5 million in 2008.

Alas, bidders failed to match his enthusiasm at an auction conducted by London firm Allsop, which was handling the sale on behalf of the receiver.

Allsop, which had listed the property with a guide price of ‘over £7 million’, declines to comment.

But one observer tells me: ‘It didn’t reach the reserve. The receiver then sold it privately for the knock-down price of £6.5 million.’

The buyer, I can reveal, is Rabia Kamani, 56, a member of the family that created online fashion powerhouse Boohoo.com.

Rabia and her brothers, Mahmud, Boohoo’s co-founder, and Nurez, pocketed more than £80 million when they sold 36.6 million shares in the company 18 months ago. 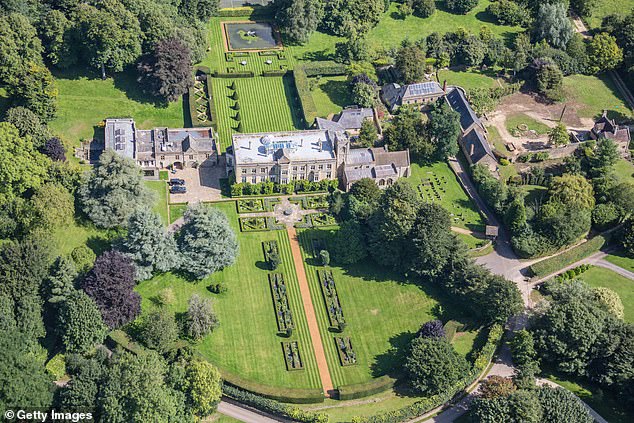 He may have better luck with his Oxfordshire mansion North Aston Hall, pictured, which he put on the market for £28million last year

Cash, whose fourth and current wife Carla was once voted ‘sexiest woman in South Africa’ by lads’ magazine FHM, had alleged that he held the property in trust on behalf of his friend and business partner, Tony Jimenez, a Dubai-based property developer. But records showed that the pad was registered in his name.

Perhaps he will have more luck with North Aston Hall, the sumptuous Oxfordshire mansion where he and Carla used to spend £50,000 a month on groceries and ‘housekeeping’, and which, as I disclosed, he put on the market for £28 million last summer.

It is owned by the Rose Trust, established by his parents, Barry and Sheila.

It’s one way to plug your bling, Kitty

Don’t turn on the taps! Lady Kitty Spencer is equally at home posing in a bathtub as she is strutting on the runway.

The model, 28, showed off her sultry looks in a sizzling bathroom photoshoot for Bulgari. 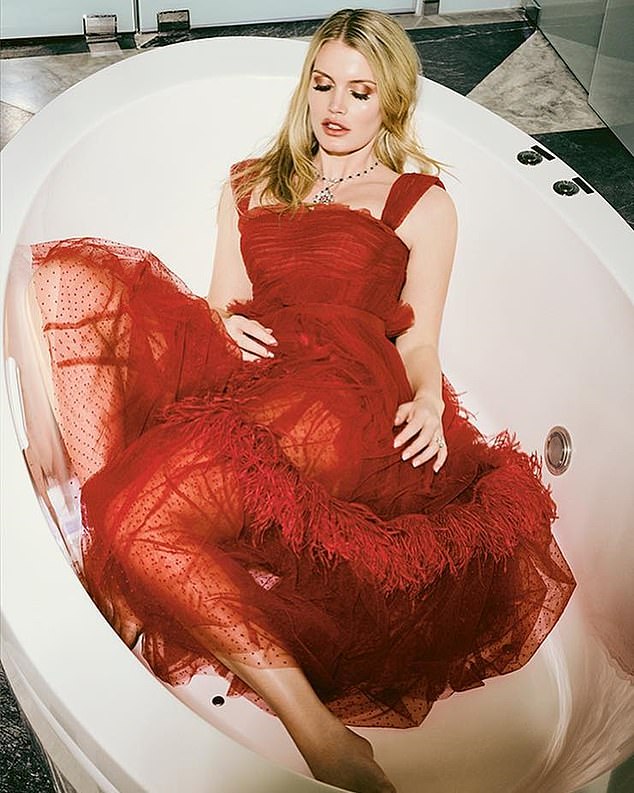 Kitty, who is Princess Diana’s niece, modelled a £5,650 Dolce & Gabbana tulle red dress and gleaming necklace for the shot, which was photographed by Alexander Neumann in Mexico.

‘Scrub a dub dub,’ wrote Kitty alongside the image posted on social media. Lady Kitty was named an ambassador for the jewellery brand last year and her work has taken her to New York, Italy, France and Beijing in the past few months alone.

He once had the privilege of cooking for the Queen.

Now Michelin-starred chef Shaun Rankin has spilled the beans. ‘I prepared her a lobster salad,’ he tells me at the Great British Brands party.

‘Her security watched over me as I prepared it. When the Queen eats outside the palace they watch the chef to make sure she’s not poisoned and only one person can cook it. It was tasted by her detail the night before and then locked in a big fridge.

That was ten years ago — I can imagine they’re even more strict today.’

Let them eat doughnuts, says Jemima on her 45th 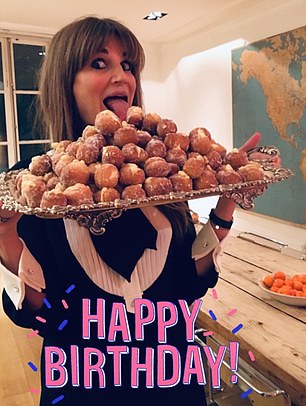 Heiress Jemima Goldsmith looks more like a delighted queen of Bake Off than happy birthday girl, posing behind a huge platter of doughnuts.

‘Home-made doughnuts — hundreds of them,’ she boasted while standing in front of a map of the world on her 45th birthday.

She’s sticking out her tongue mischievously, but it is unlikely she would ever let anything so sugary or calorific to pass her lips.

TV producer Jemima has another cause for celebration, as her new six-part documentary The Clinton Affair, about the impeachment of the former U.S. president, began broadcasting last month.

Lucian Freud’s Rubenesque muse Sue Tilley swore she would never pose naked again — but at 62 she has been persuaded to do so by fashion-designer-turned-sculptor Nicole Farhi.

‘Nicole is different, she likes and understands women — the trouble was Lucian never appreciated me,’ grumbles Sue, who was the subject of Freud’s 1995 painting Benefits Supervisor Sleeping, for which Roman Abramovich paid an at-the-time record-breaking £17.2 million.

‘Lucian just liked plain women, women who looked like boys. I was definitely too beautiful for him.’ And who would argue?

Former U.S. Secretary of State Henry Kissinger and former head of the British Army Lord Bramall, both 95 and both in wheelchairs, attended the memorial service for Lord Carrington in Westminster Abbey yesterday.

Kissinger once said that, of all the statesmen he had met, none impressed him more than Lord Carrington, who resigned as Foreign Secretary in 1982 at the start of the Falklands War.

Lord Luce, who resigned as a junior minister at the same time, told the congregation: ‘The Argentine invasion of the Falklands wasn’t his fault, but he felt he had to carry the can.

‘He said he only lost his job. Others lost their lives.’

Belly-dancing ex-wife of peer shimmies off 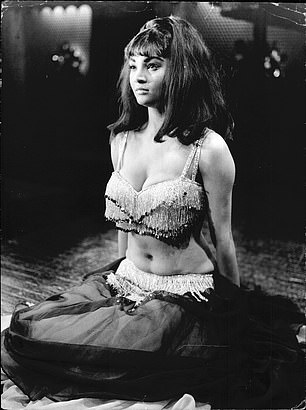 Born in Karachi, ‘Princess Amina’ performed for the Shah of Iran and boxer Joe Louis

She was the only woman to have both married into the aristocracy and achieved a global following as a belly-dancer.

But ‘Princess Amina’ — as she was styled by her first husband, the 3rd Lord Moynihan — has now shimmered off this mortal coil aged 80.

‘She died two days ago at her villa in Italy,’ a family friend tells me.

Born in Karachi, Amina performed for everyone from the Shah of Iran to boxer Joe Louis.

The peer later decamped to the Philippines where he financed his colourful lifestyle with a string of massage parlours.

TV explorer Levison Wood, who went to Sandhurst with Prince Harry, tells me he’s surprised his pal has embraced the clean-living lifestyle, after it was revealed the Duke of Sussex has taken up yoga.

‘He’s changed since the days I knew him. He did not do yoga then,’ he tells me.

‘I do yoga too, three times a week, but I mix it up with lots of booze. I think it’s all about balance in life. I’m definitely up for a yoga class with Harry.’

And a pint or three?