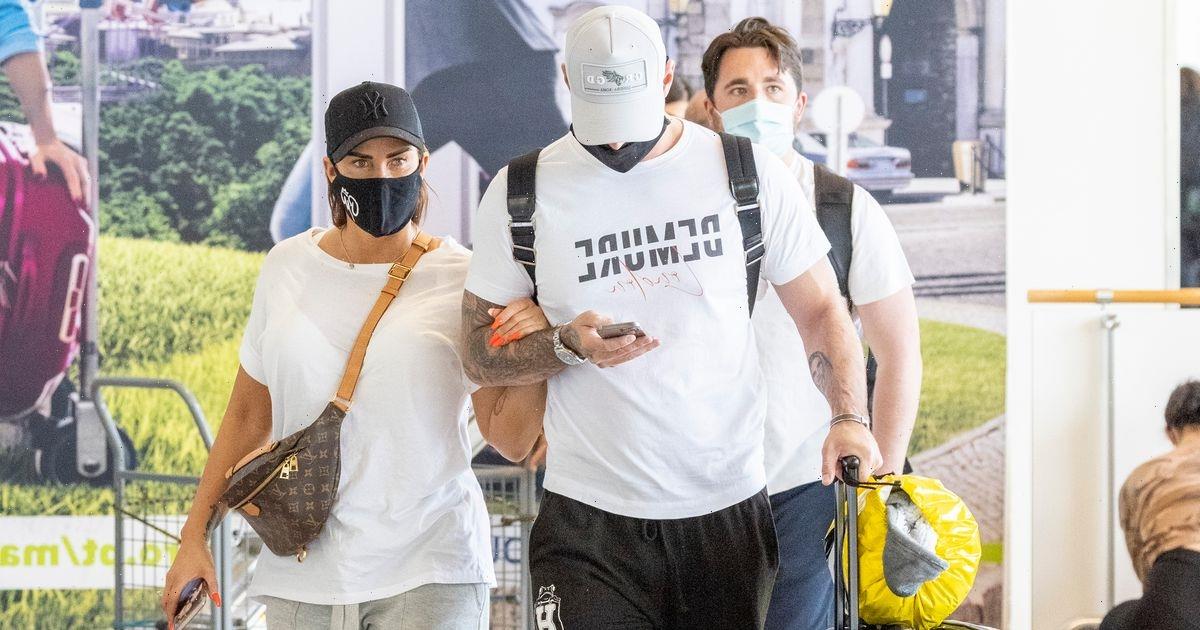 Bankrupt Katie Price and fiancé Carl Woods hopped straight onto a plane on Monday morning amid the easing of Covid restrictions.

As well as enjoying indoor seating at a restaurant, entertainment venues such as the cinema and the affectionate act of hugging, Brits are also able to now go on foreign holidays to a small number of approved green list countries.

And former glamour model Katie wasted no time as she and Carl jetted into sunny Faro, Portugal for a much-needed spell of sunshine.

Katie kept her airport attire low-key as she sported a chic Louis Vuitton bumbag over her baggy white shirt.

Documenting their excitement at their holiday, Katie and Carl, who flew from London's Stanstead Airport, cuddled up for an Instagram snap from the flight.

'Yesss finally @carljwoods a gorgeous break," the 42 year old captioned the image in which she put wore face masks – which is mandatory for flights.

Over on Carl's Instagram Stories, he documented their arrival to a sunny identified location.

"Yay, we made it!" Carol told followers, while Katie acknowledged their friendly travel companions, saying: "Boys at the back!"

The getaway comes after Katie admitted she "loves" being bankrupt – and wants to stay in it for as long as she can.

In a recent interview with OK!, Katie, said her bankruptcy is the best thing that's ever happened to her.

"I've been sucked dry in the past. I was mentally abused and broken by everyone," she said. "It's not like I have skeletons in my closet, but everyone tried to get everything they could out of me.

"My bankruptcy is the best thing that's ever happened to me."

Katie, who was first declared bankrupt in November 2019 after the High Court found she had failed to stick to a plan to repay her debts, continued: "Because anyone who has ever been in my life before has tried to take from me, financially mostly.

"It has been a secret security to me that Carl is not with me for any money I have, as I don't have millions in the bank"

Meanwhile, Katie is undoubtedly hoping that her holiday will offer some light relief after admitting her struggles to conceive a child with Carl.