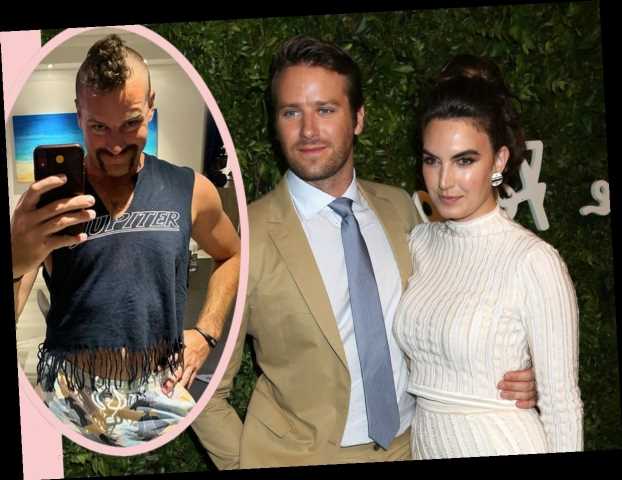 On the one hand, we assumed we hadn’t heard the end of the Armie Hammer scandal — on the other, this is still a little surprising.

Vanity Fair published an epic recounting of the Hammer family’s history of violence and scandal, including great-grandfather Armand Hammer‘s alleged money laundering and involvement in Watergate, grandfather Julian getting away with killing a man “over a gambling debt and supposed advances on his wife,” and his father Michael‘s financial scandals and sexual kinks.

The article attempts to place Armie’s scandal in a historical context, just the next in a line of creepy Hammer men — and it does a darn good job of making that case.

Three sources told the outlet Michael Hammer has what he calls a “naughty chair” in the Armand Hammer Foundation headquarters in Carpinteria, California. The chair is a 7-foot-tall throne with a hole in the seat — and a cage underneath with a hook. The author describes having seen a photo in which Michael sits atop the throne, which is adorned with the family crest, “while holding the head of a blonde woman, sitting in the cage and also smiling.”

(VF says Michael and the Armand Hammer Foundation’s counsel responded to questions about the throne and other allegations with the statement, “These questions, which ask about unsolicited gag gifts sent by friends, conduct that sounds pretty typical of recently-divorced people, and entirely legal financial transactions that were properly accounted for, are absurd.”)

OK, this history is legit fascinating. (You can read the entire lengthy piece HERE.) But is there anything new they can tell us about Armie and his cheating/abuse/cannibalism scandal?

VF spoke to sources close to Elizabeth Chambers and got details we’ve never heard before about the divorce.

A friend claims Armie actually confessed to cheating back in 2017 — just after the birth of their son. Only, he told her it was a one-off. Not a series of indiscretions with numerous “kittens” as we’ve been led to believe from the text message leaks. However, says the friend, Elizabeth subsequently — years later, in fact — discovered he was having another affair with a co-star.

Could this have been Lily James on the set of Rebecca? We heard reports last year that the stars had exchanged “passionate texts,” a dalliance which may have ushered in the end of Hammer’s marriage.

Apparently this all came out while the family was staying in the Caymans during quarantine (Hammer’s family has owned property there for decades; it’s where he grew up). It was then that Armie decided to abandon his family despite the pandemic!

As he told British GQ last year, he was like a wolf ready to “chew his own foot off” to get out of there:

“It was a very complicated, intense situation, with big personalities all locked in a little tiny place. I don’t think I handled it very well. I think, to be quite frank, I came very close to completely losing my mind.”

However, VF‘s source says there was another more direct cause for the divorce, a singular final straw.

They say the minute Armie’s plane landed in LA, he accidentally sent his wife “a raunchy text message” he meant to send to another woman!

It was after that when Elizabeth filed for divorce.

And things only got worse once Armie became single again. The wolf was unleashed, as it were. Not only did he start drinking and abusing drugs in earnest, per close friends, he also bounced from relationship to relationship with younger women. That much was documented before we heard what he was doing to them.

He also reportedly followed in his father’s footsteps in other ways. That Finsta with the Miss Cayman fiasco? According to multiple sources, Michael Hammer also sent x-rated photos of his exploits to friends. He also started getting tattoos like his dad.

Two friends said he has gotten at least five tattoos since the split:

“an outline of the Caymans above his knee; a heart that was inked by the in-house tattoo artist at Kaia Gerber’s birthday party to match two teenage boys’; the letters ‘E.G.B.A.,’ standing for ‘Everything’s gonna be alright’; and the word ‘chaos’ because he wants his life to be chaos.”

But Armie wasn’t interested in tying up mannequins, as his girlfriends after his divorce found out. Ex Courtney Vucekovich claims he talked her into it with a lie:

“One of the most shocking things, that I realized he did to other women, is he says that he never tied up a human being before, only mannequins.”

She may have realized later this was a line he fed to each woman, but she bought it:

“I remember thinking, like, That’s got to be true because that’s the weirdest f**king thing I’ve ever heard. Who would lie about that? That’s weirder than saying, ‘I tied up 25 people.’”

She says one night he drunkenly pushed her into “a bondage scenario that I was not comfortable with.” She says when she refused he got “angry” and eventually harangued her to the point she consented though she “really regretted doing so.”

His next “kitten,” Paige Lorenze, also spoke to the outlet. Both women said he told them early on about family trauma and secrets, a sort of quicker bonding through sharing personal info. But in retrospect there were maybe some red flags in his stories — and the way he told them. Lorenze paints a picture:

“A lot of really dark stuff. I felt confused why he was telling me this stuff so instantly… It was stuff I would never share off the bat… He said his grandfather was this kind of very scary person who had these crazy sex parties where there would be guns.”

But he told her this with awe in his voice, she told VF:

“He thought it was cool and was proud of him in a way.”

Lorenze explains she broke up with Armie when his behavior got too controlling:

“He started making rules for me of things I could and couldn’t do, who I could have over, who I couldn’t. He told me that I couldn’t have anyone else in my bed. And then I just started to feel really unsafe and really sick to my stomach about things.”

How unsafe? She broke up with him over text message “because you never know what you’re going to get with him — he’s kind of a scary person.”

Wow. She was given a sign she made the right call pretty quickly afterward when an account called HouseOfEffie leaked tons of text messages he had allegedly sent to various women over the years, messages which included talk of rape, sexual slavery, and cannibalism fantasies:

“I saw these screenshots and my stomach just dropped, like, Holy f**k. Because he would say things to me…weird stuff…like, ‘I want to eat your ribs.’ The scariest part of it is that I did love him in a way. I would’ve let him kind of do anything. He had a certain hold over me.”

Lorenze and Vucekovich are the only women who have gone public with their accusations against Armie, but word is there is a group of women who found one another, and that’s where the texts came from.

(Armie’s lawyer issued a statement about the allegations saying, “All interactions between Mr. Hammer and his former partners were consensual. They were fully discussed, agreed upon in advance with his partners, and mutually participatory. The stories perpetuated on social media were designed to be salacious in an effort to harm Mr. Hammer, but that does not make them true.”)

There are people still in Armie’s corner who apparently find the timing of all these allegations suspicious — meaning right in the middle of his divorce. However, the sources close to Elizabeth attest she was “blindsided left, right, and center” by all of this. And she’s horrified that all of this is out in public:

“The internet is forever, and it kills her that one day her children will see how brazen their father has been, not only with his casual dating and drug use, but with these deeply disturbing allegations.”

According to these friends, while the Bird Bakery founder is afraid, she’s using gallows humor to keep her spirits up. She is said to have joked “that the only thing that makes sense to her, looking back on her marriage since the allegations surfaced, is the Netflix movie starring Zac Efron as Ted Bundy — Extremely Wicked, Shockingly Evil and Vile.”

What do YOU think of these new pieces of the Armie Hammer story??