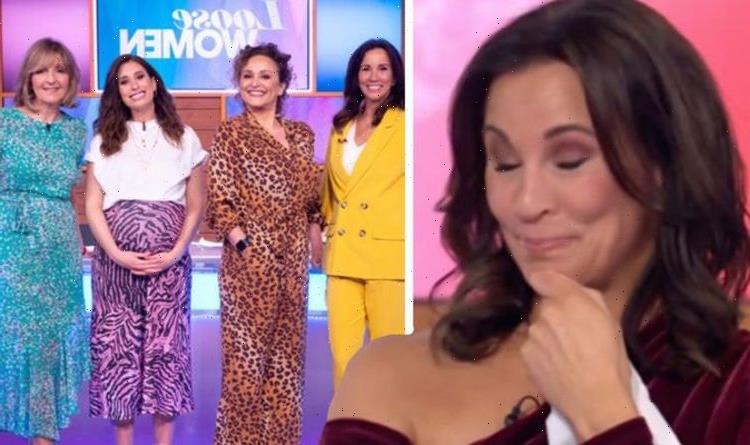 Andrea McClean, 51, admitted that when she was offered a job on Loose Women, she actually turned it down. She eventually became the ITV chat show’s longest-running host, but before she joined the cast in 2007, she revealed she thought it was full of “lots of shouty ladies”.

Chatting to Jennie Becker on her Sliding Doors podcast, the TV presenter took a look back on her successful career in the spotlight and the incredible moments that got her there.

And while many of us spend our lives going after what we want, it just so happens that when the pressure is off for Andrea, she actually lands where she is meant to be.

“Every job that I’ve gone for that I’ve really wanted, I’ve never got, ever!” she told Jennie.

“I’ve been up for some really amazing jobs in TV and never got them.

“But the great jobs that I have got have kind of landed sideways, and it’s been because I was quite chilled about it and not really sure.”

She went on to talk about her 13-year stint on Loose Women and how when she was offered the opportunity, it wasn’t love at first sight.

“I didn’t even want Loose Women when it first came out,” she explained.

“I turned it down!

“I just thought that’s the job where there’s lots of shouty ladies.”

But she remembered thinking that despite it not necessarily being the job she really wanted at the time, she wanted to give it a go anyway – and it definitely served her well.

“I’ve evened up being their longest-serving host!” she laughed.

Andrea stood down from the panel last November, shocking fans with a surprise announcement.

In an emotional on-air statement, she revealed while wiping away tears that she would be “saying goodbye” to the show at Christmas time.

“Last year I had a nervous breakdown,” she continued.

“What I felt is that this year, collectively, the world has had a breakdown.

“It made me stop and think, ‘What do I actually want?’ You get one life, are you living it the way that you want?”

She went on: “Are you doing everything that you want to do? Are you being brave? Are you taking chances? And I realised, no.”

Andrea said it was her decision to leave to concentrate on her website and brand.

While she realised it was a “big decision to jump”, she admitted she would never know if she would “fall or fly” unless she tried.

Alongside her TV work, Andrea is also the author of three books, including 2018’s Confessions of a Menopausal Woman, and the co-founder of a female empowerment site called This Girl Is On Fire.