The moment you’ve been waiting for has finally ARRIVED: Harry Styles and Olivia Wilde were photographed making out atop a yacht in their swimsuits, firmly cementing them as one of Summer 2021’s most loved-up couples alongside Kourtney Kardashian + Travis Barker and Machine Gun Kelly + Megan Fox. I mean, they haven’t started publicly sucking each other’s fingers yet, but give them time!!!!

Photos of Harry and Olivia were published exclusively by Page Six (see them right over here) and show them kissing on a yacht in Monte Argentario, as well as—per the outlet—dancing, reading, and also cuddling. In other words, they were living the dream. 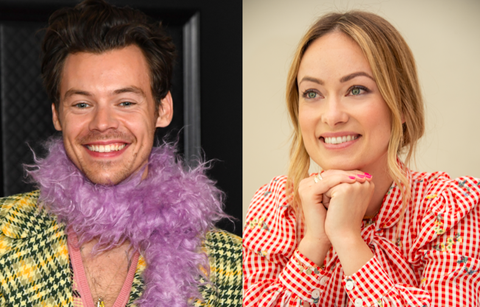 In case you were wondering, Harry and Olivia have been vacationing in Italy for a minute, and arrived shortly after Harry wrapped filming on his new film My Policeman in England. Last week they were seen in Porto Ercole, and a source says that “Olivia has also been in London, spending time with her kids, who are there with Jason. Olivia stayed behind with her kids, then she flew into Porto Ercole to join Harry.”

Anyway, these two are obviously super serious, and a source also just told Entertainment Tonight that “It’s obvious that this was not a rebound or a short fling” and that “they care so much about each other and have a deep connection.”

Got it. Now excuse me while I go inform my boss I’ll need the rest of the day off to be alone with my feelings after looking at these pics.