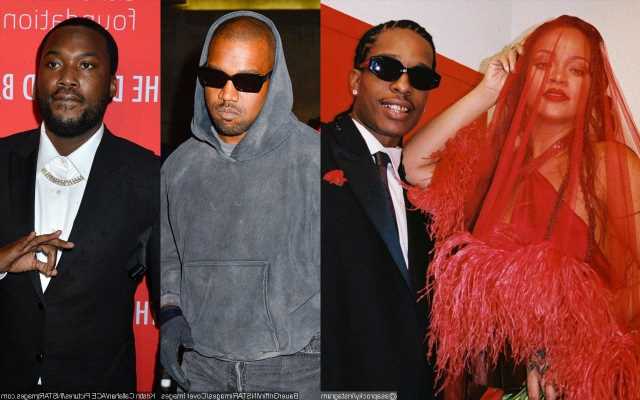 The ‘Peso’ rhymer reportedly abandons his joint project with the controversial rapper after the Yeezy designer previously also said that Rocky hooked up with Ambush creative director Yoon Ahn.

AceShowbiz –Kanye West may be losing some friends amid his recent antics. A$AP Rocky and Rihanna have reportedly distanced themselves from the Atlanta native after he made some wild claims about the pair.

During his jaw-dropping interview on “Drink Champs” podcast, Ye claimed that Rihanna slept with Meek Mill. In the now-infamous interview, the “Off the Grid” emcee said that Meek wrote a song while he was in jail, claiming once he gets out, he plans on sleeping with Rihanna. According to Ye, Meek did exactly that.

Prior to the interview, Ye also claimed that Rocky hooked up with Ambush creative director Yoon Ahn. “Ambush Weak,” he wrote in a since-deleted Instagram post, adding, “Rocky f**ked Yoon. Next.” He captioned the post, “God is Love.”

Catching wind of the post, Yoon quickly set the records straight. The fashion designer denied Ye’s claim as she wrote in a comment, “LOL. Not true but okayy.”

Since then, Rocky and Rihanna reportedly have cut ties with Ye. According to Urban Islandz, the New York City star and the Yeezy designer were working on new music and were in regular contact with each other, but that all changed when the ex-husband of Kim Kardashian made the bizarre claims about the couple.

“All of that changed after last week, all communication stopped,” sources said of Rocky and Kanye’s friendship as the Harlem rapper reportedly felt betrayed by Kanye’s allegations. “They haven’t spoken about the lie he told and believe me ASAP feels strongly about it because its like an assault on his relationship with Rih, almost like the guy trying to ruin their relationship.” The sources added, “They’re one hundred percent not on speaking terms and its unlikely their recent recordings will see the light of day.”

Kanye recently hinted at his interest in joining Rihanna for the Super Bowl Halftime Show performance. But with all the negative headlines regarding his “White Lives Matter” T-shirt and his anti-Semitic remarks, it’s unlikely that she will choose him as a guest artist for the gig.