Money troubles. 90 Day Fiancé couple Steven and Olga Frend have launched a GoFundMe fundraiser page and are asking fans to donate money to help them pay bills and care for their infant son.

The pair, who star on season 6 of the TLC hit with Russian-born Olga, created the page on the crowd-funding site on Thursday, December 20, and are seeking to raise $15,000.

“Drastic times call for drastic measures,” wrote Steven, 21. “Trying my hardest to get my life on the right track and I feel as if I’m doing a great job. But we face certain hardships; Olga will be unable to work for an extensive period of time, as for myself I just landed a job opportunity as a Fire Sprinkler Installer (Apprenticeship Program) the training is 4 years long. Starting out at $16 an hour isn’t the best but in the long run it’ll do us okay, I’ll get a raise every 6 months depending or how hard I work at this job (Monday – Friday 7am – 5pm).” 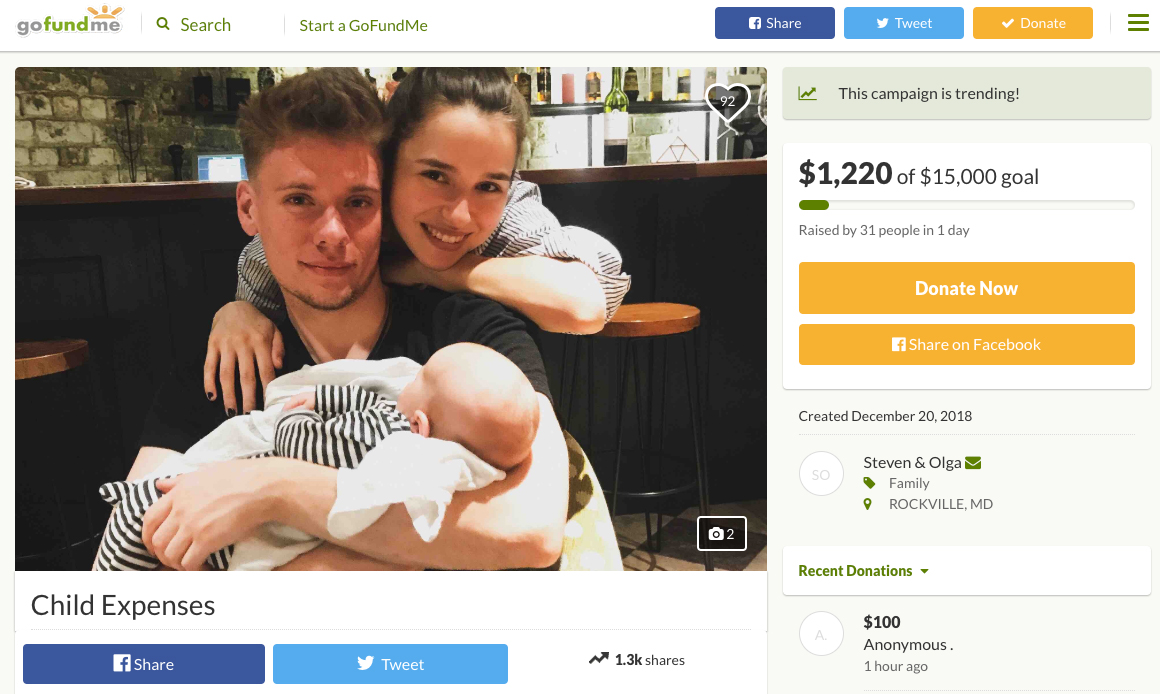 The 21-year-old, who welcomed his first child with Olga earlier this year, added that he has registered for college and will fit his classes around his work schedule, but it will take eight years of schooling “in the field I want.”

“After apprenticeship I’ll be making $30-$35 an hour and that’s good for the age of 24. But $16 an hour isn’t enough to support a family of 3 as well as taking care of home bills, gas, etc,” he concluded. “I’m very nervous on how things will play out but I have faith god will take matters into his own hands. I’m not asking for a lot, in a matter of fact I feel ashamed having to make this campaign but I must do what is best to support my family. Thank you for your consideration and have a happy holiday.”

So far the couple have raised $1,220 and, in an update, Steven defended asking for financial help, “since people obviously have hate over a reality show.”

“I want time with my wife and son, no matter how much money you make in life, you’ll regret all the time you didn’t spend with you family because you were to busy focusing on paper,” he wrote, explaining that rent in Maryland averages $2,000 a month on top of utilities, car insurance, gas, food, diapers and clothes for his son and student loans. “I’m trying my best but I still need to be there for my family.”

Steven and Olga, 20, met on the beach in Maryland while she was on vacation from Russia. She got pregnant after they had unprotected sex one time and when she arrived back home they decided to get engaged and that Olga would move to the U.S. and raise the baby there. As viewers saw, Olga’s visa application was delayed and she ended up giving birth to son Richie in Russia, with Steven by her side. She and the baby subsequently joined her fiancé stateside. It’s unclear exactly when they wed.