Every summer we dutifully slip, slop, slap, and rightly so given Australia has one of the highest rate of skin cancer in the world. But new research suggests chemicals found in sunscreens are linked to coral bleaching.

Scientists say the toxic chemicals found in sunscreen, in particular oxybenzone and octinoxate, are just as dangerous to coral life and its depletion as warming ocean temperatures and extreme weather conditions. 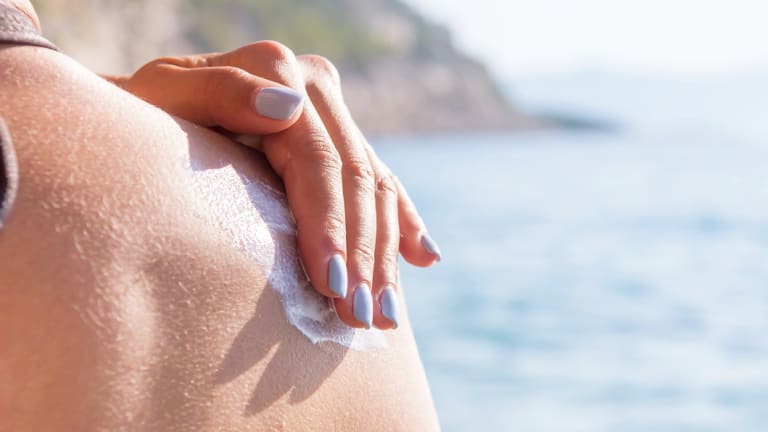 What is your sunscreen doing to the ocean?Credit:Shutterstock

An estimated 14,000 tonnes of sunscreen is deposited in the world’s oceans each year.

Dr Craig Downs, executive director of the Haereticus Environmental Laboratory in the USA, says these chemicals are rampant in other cosmetics too, from shampoo and conditioner to mascara, lip balms and moisturisers.

The impact is felt widely.

“We are finding oxybenzone in sea turtle eggs, the fish we eat, shrimp, oysters and clams and they show an alarming level of toxicity to marine life," he says.

Aerosol sunscreens, says Downs, which can travel up to half a kilometre away once applied, are another concern.

“We know how far it can travel when sprayed and we’re seeing it get in the sand. The chemicals are deeply embedded there and easily absorbed through an egg shell."

Last year Hawaii became the first US State to ban oxybenzone and octinoxate based on research linking sunscreen chemicals to negative impact on coral reefs. The ban is effective from January 2021. You won’t be able to holiday there without reef-approved sunscreen.

The Western Pacific Ocean island of Palau has also banned many kinds of sunscreens.

A disincentive for consumers is the increased cost of non-toxic sunscreens.

Brands to look out for include Badger, Aveeno Baby and COOLA.

Cosmetics giant L’Oreal recently partnered with the Tara Pacific expedition – a not-for-profit foundation, which works to better understand environmental impacts on the ocean – to test the sunscreen chemical impact on coral.

Hawaii’s sunscreen ban came as a surprise to Haas.

“We were a little bit concerned that Hawaii went for a ban because there was not a lot of science that went into this particular determination," she says.

“But we are looking at this matter closely and prepared to work with environmentalists and regulators."

L'Oreal has a sunscreen without oxybenzone and octinoxate in its La Roche-Posay sensitive skin range.

No time to waste

“The beauty industry hasn’t changed in 60 years,” he says. “They use the same formulas, different advertising and new claims. It’s the same product over and again.”

“Coral not only has to contend with the adverse side effects of climate change, but the pollution in the water is a huge factor. Sunscreens with these pollutants are harmful and the ocean needs our help quickly.

“The quicker we stop polluting our water the better chance marine life and coral reefs can survive,” he says.