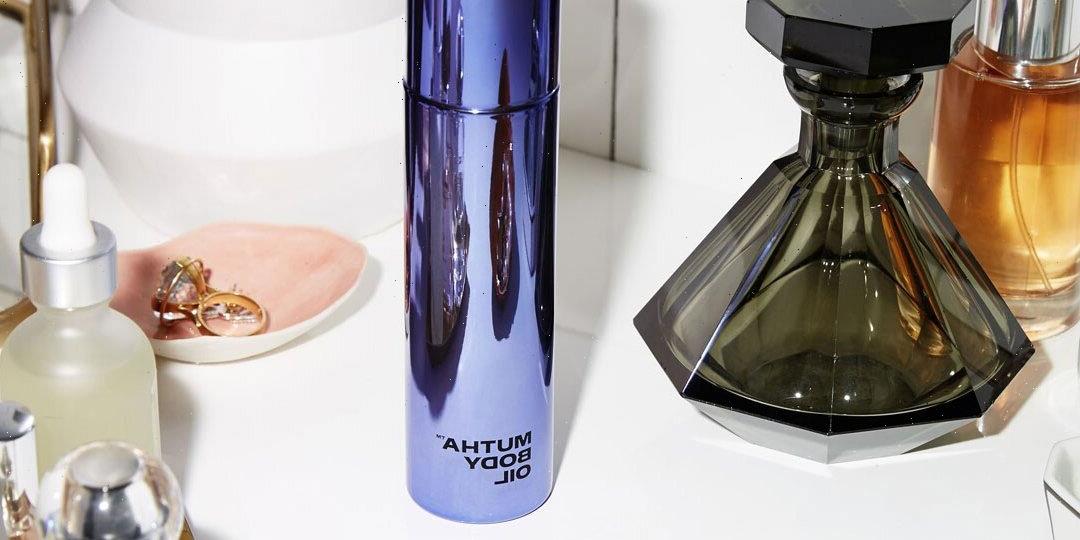 My body likes to play a cute little game called "Is This Going to Break You Out?" — I don't understand the rules and I don't get to pick when we play. Everything from the usual suspects, like a new skincare formula, to doing nothing but toweling off after a shower leads to unsightly red spots popping up all along my chest and shoulders. Because of this, I timidly experiment with body oils and lotions, and my skepticism is usually proven to be right.

Among the half-used jars sitting on my bathroom counter that have left my sensitive skin unimpressed, there is only one bottle that quite literally outshines the rest. Mutha's Body Oil comes in a metallic blue vessel that not only makes it look whimsical, but hints at how magical its insides are. The botanical blend contains nine different oils, and it has made a world of difference for my skin. If you're anything like me, splurging on beauty products is an analytical process. I pick and choose what I feel comfortable spending extra on, and body oil was never something I thought was worth forking out the money for until I actually tried Mutha's version. It's crafted for dry skin and is full of nourishing vitamins (like C and E). But despite its intended purpose, I found it to be a little knight in shining armor for every time my skin gets irritated, too.

After my sheets were accidentally washed with a scented laundry detergent, a small herd of angry red dots appeared all over my chest and refused to budge. It was painful, itchy, and to be quite frank, not a good look. Fortunately, a few nights of using the oil led to them fading rather than exacerbating the problem. And I didn't look like an oily mess either.

As oxymoronic as it sounds, this is a dry oil. Translation: It absorbs quickly and your skin feels soft and looks luminous but isn't at all greasy. This is a feature I'm especially thankful for since I like to apply it before bed but can't stand how many stains my sheets get from skincare products that don't soak in fast enough. After a warm shower, it feels like a mini luxury slathering it all around, and even better that there's virtually zero waiting time between applying and hitting the hay. The brand also has a face oil and body butter, both of which I've tried, too, and led to the same glow and supple skin upon waking up.

Sensitive skin was formerly the bane of my existence, but Mutha's soothing formula has most certainly become my ride or die in defeating irritation and dryness.